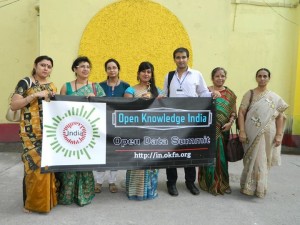 Open Knowledge India, with support from the National Council of Education Bengal and the Open Knowledge micro grants, organised the India Open Data Summit on February, 28. It was the first ever Data Summit of this kind held in India and was attended by Open Data enthusiasts from all over India. The event was held at Indumati Sabhagriha, Jadavpur University. Talks and workshops were held throughout the day. The event succeeded in living up to its promise of being a melting point of ideas.

The attendee list included people from all walks of life. Students, teachers, educationists, environmentalists, scientists, government officials, people’s representatives, lawyers, people from the tinseltown — everyone was welcomed with open arms to the event. The Chief Guests included the young and talented movie director Bidula Bhattacharjee, a prominent lawyer from the Kolkata High Court Aninda Chatterjee, educationist Bijan Sarkar and an important political activist Rajib Ghoshal. Each one of them added value to the event, making it into a free flow of ideas. The major speakers from the side of Open Knowledge India included Subhajit Ganguly, Priyanka Sen and Supriya Sen. Praloy Halder, who has been working for the restoration of the Sunderbans Delta, also attended the event. Environment data is a key aspect of the conservation movement in the Sunderbans and it requires special attention. 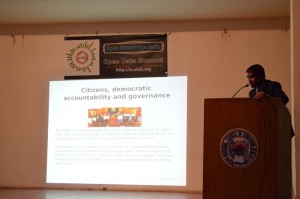 The talks revolved around Open Science, Open Education, Open Data and Open GLAM. Thinking local and going global was the theme from which the discourse followed. Everything was discussed from an Indian perspective, as many of the challenges faced by India are unique to this part of the world. There were discussions on how the Open Education Project, run by Open Knowledge India, can complement the government’s efforts to bring the light of education to everyone. The push was to build up a platform that would offer the Power of Choice to the children in matters of educational content. More and more use of Open Data platforms like the CKAN was also discussed. Open governance not only at the national level, but even at the level of local governments, was something that was discussed with seriousness. Everyone agreed that in order to reduce corruption, open governance is the way to go. Encouraging the common man to participate in the process of open governance is another key point that was stressed upon. India is the largest democracy in the world and this democracy is very complex too.Greater use of the power of the crowd in matters of governance can help the democracy a long way by uprooting corruption from the very core. 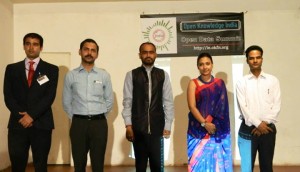 Opening up research data of all kinds was another point that was discussed. India has recently passed legislature ensuring that all government funded research results will be in the open. A workshop was held to educate researchers about the existing ways of disseminating research results. Further enquiries were made into finding newer and better ways of doing this. Every researcher, who had gathered, resolved to enrich the spirit of Open Science and Open Research. Overall, the India Open Data Summit, 2015 was a grand success in bringing likeminded individuals together and in giving them a shared platform, where they can join hands to empower themselves. The first major Open Data Summit in India ended with the promise of keeping the ball rolling. Hopefully, in near future we will see many more such events all over India.

Subhajit Ganguly is the Ambassador Open Knowledge India and is a part of several Open Education, Open Data and Open Science initiatives. He is a physicist whose areas of expertise include the Theory of Abstraction. His contribution to the theory is noteworthy, to say the least. The other areas of science, that he has made notable contributions to include astronomy, mathematics and the Chaos Theory. Zero-postulation is a new concept he has introduced to the theorizing process in sciences. He has also made noteworthy contribution towards deciphering the Indus Valley Civilization script.