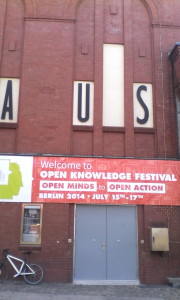 This year’s Open Knowledge Festival was held from 15-17 July in Berlin, Germany. It was attended by representatives and enthusiasts from 56 countries. The Festival has been the largest of its kind till date and was attended by Google, Omidyar Network, Partnership for Open Data, Open Corporates, Science Open, Open-Steps, Wikirate among others. Among the keynote speakers were Neelie Kroes (Vice President and EU Commissioner for Digital Agenda, European Commission), Patrick Alley (Founder of Global Witness and member of the WEF Global Agenda Council for Conflict prevention), Beatriz Busaniche (Founder of Wikimedia Argentina and key member of Argentina’s Fundacion Via Libre), Ory Okolloh (Co-founder Ushahidi and Mzanlendo, Director of Investments Omidyar Network), Eric Hysen (Head of Politics and Elections, Google), etc. The festival played host to a number of bright new ideas and helped a great deal in consolidating the global stand for opening up information.

The UnFestival and several fringe events formed an important part of the Open Knowledge Festival, 2014. In these, people from all over the world showcased their stories and exchanged ideas. The talks revolved around a diverse range of topics, including Open Data, Open Education, Open Glam, Open Science, building up new tools and partnerships, etc. A very efficient team of volunteers worked day and night to make the events a grand success. Open Minds to Open Action had been this years theme at the Festival. Knowledge, tools and society had been the three predominating streams around which all talks and discussions took place. To put broadly, the underlying driving forces had been: Knowledge (that informs change), Tools (that enable change) 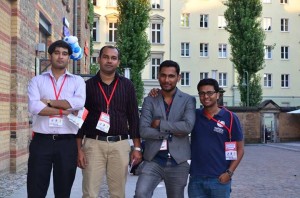 and Society (that effects change).

India’s Role at the global stage:

Open Knowledge India played an important role in the event and put forward a number of new ideas. Our mode of action has been finding out the problems that affect us locally, brainstorming with the global community, finding out solutions and finding out ways of implementing the solutions locally. The motto for us had been Thinking Local and Going Global. Among the few new lines of action that we proposed are:

‘Reflecting the diversity of the open movement, by including contributions from different disciplines, countries and cultures…’ had been the key lookout of the organizing team for the event this year. True to this spirit, the Open Knowledge Festival, 2014 did manage to create a melting-pot of ideas and discourse. It managed to create a roadmap for an even brighter future ahead for humanity.

Subhajit Ganguly is the Ambassador Open Knowledge India and is a part of several Open Education, Open Data and Open Science initiatives. He is a physicist whose areas of expertise include the Theory of Abstraction. His contribution to the theory is noteworthy, to say the least. The other areas of science, that he has made notable contributions to include astronomy, mathematics and the Chaos Theory. Zero-postulation is a new concept he has introduced to the theorizing process in sciences. He has also made noteworthy contribution towards deciphering the Indus Valley Civilization script.