This is the final post in the Open Data in India series. Our visit to India wasn’t just about meetups… the following post deals with the individuals and organisations that Lucy and Laura met whilst in India, the questions they were asked and the projects they were introduced to. It is cross-posted on the OKFN blog.

We had so many fantastic conversations about open data whilst we were in India. Some of these have already featured on our blogs, some are still to come. We thought however that it could be useful to do a quick recap. Below, you can find a list of some of the interesting organisations we came across, loosely categorised into ‘Data Collectors and Users’, ‘Data Journalism and Literacy’, ‘Policy’, and ‘Techies & Networks’. There are also a few suggestions of people to follow on Twitter (NB: by no means complete!), and a quick summary of the latest government initiatives and developments relating to open data.

This is by no means a comprehensive guide to everyone who does open data in India, but we hope it does include some of the key players… Have we missed someone? Let us know!.

The Akshara Foundation is a Bangalore-based Public Charitable Trust with the mission to ensure that every child is in school and learning well. Established in the year 2000, Akshara Foundation has a range of programmes that provide multiple solutions for universalizing elementary education. Gautam John from the Karnataka Learning Partnership joined us for the Open Data meetup in Bangalore.

The India Water Portal – supported by Arghyam – is an open, inclusive, web-based platform for sharing water management knowledge amongst practitioners and the general public. In Bangalore, we visited the IWP offices where we met both Deepak Menon and Nisha Thompson. Nisha is also the coordinator of the active Datameet group – more on them below! The India Water Portal have created the DataFinder, which now contains almost 200 sources of water-related data in a searchable database.

Janaagraha is a non-profit organisation based in Bangalore, India. It works with citizens and the government to improve the quality of life in Indian cities and towns. We first came across them through their project I Paid a Bribe. Unfortunately, we didn’t get chance to meet them this time round, but hope to meet them next time.

Whilst visiting the India Water Portal, we began to discuss whether technology could actually improve the day to day lives of citizens. NextDrop was suggested as a simple but powerful example of one way in which it can.

In some areas of India, piped water is available for only a few hours at a time once or twice a week, and residents have no way of knowing when that will be. NextDrop solves this problem by using basic mobile phones to collect real time water delivery information from water operators in the field. They then distribute this information to the people who need it: city residents and engineers in the water utility. The services help urban residents save time and reduce the daily stress of uncertain water, while enabling utilities to become more efficient and more transparent.

Next Drop was also the winner of a Knight News Challenge award in 2011. 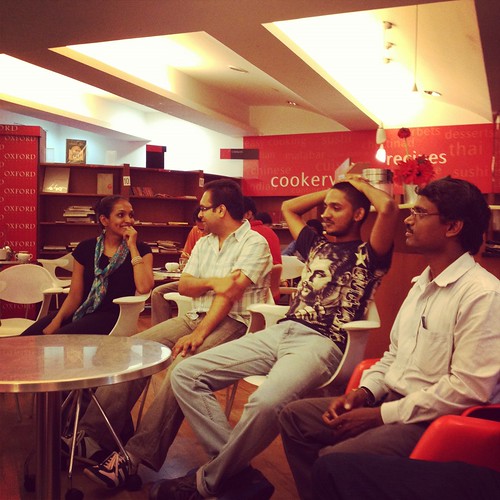 In Chennai, we took part in Transparent Chennai’s Open Data Camp, organised by Nithya Raman, Srinidhi SampathKumar and team. Transparent Chennai aggregates, creates and disseminates data and research about civic issues in Chennai, including those issues that particularly affect the poor and the marginalised. Transparent Chennai’s work is unique because they actually create maps and data to help people to understand the issues facing city residents. Using their Build a Map tool, users can also select layers of features to create their own interactive city map. The team are doing some fantastic work, and are actively seeking ways to openly license the data they collect. 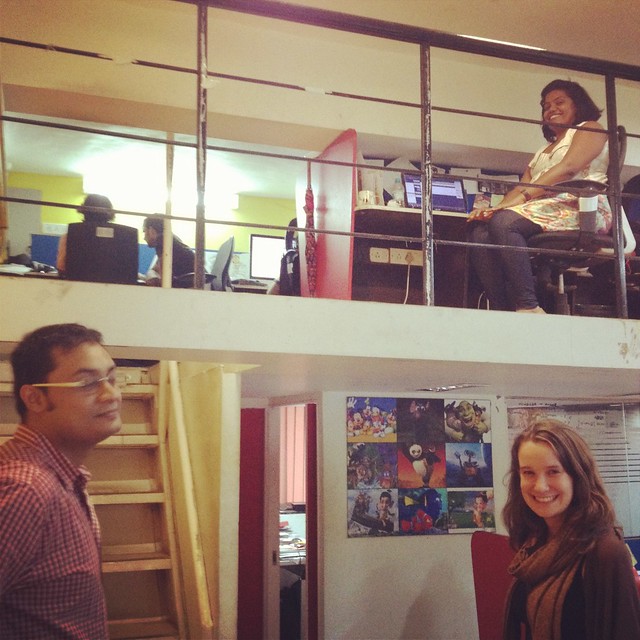 Billing itself as ‘India’s first Data Journalism Initiative’, the Spending & Policy Research Foundation’s objective is to work with Government, public policy enthusiasts and media to foster data-led discussion and analysis. They try not to offer any opinions on a subject, instead allowing the data to speak for itself.

MediaNama covers Digital and Media business in India, providing news, opinion and analysis on new launches, Mergers & Acquisitions, Venture Capital Funding, Industry Research, Joint Ventures and other business developments related to Internet and Mobile communities. They could also be described as a data journalism initiative, having experimented with different styles of visualisation. We met them at the Fifth Elephant conference and had a great conversation about how readers in India interpret visualisations, and whether they are worth the time that is invested into them. 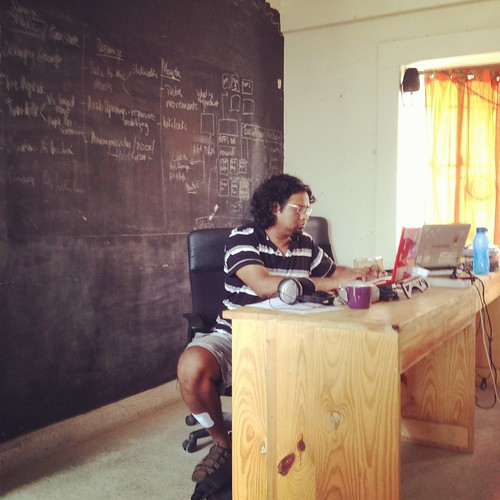 The Open Knowledge Foundation has already worked closely with some of Tactical Tech’s European team, most recently on the School of Data, so it was wonderful to catch up on the work they have been doing in Bangalore. Over our very first ‘proper curry’ (eaten off a coconut leaf!), we learned about their huge array of projects, which include data literacy tools such as Drawing by Numbers, the Sex Workers’ Advocacy project, and many more.

We met @prolificd in Mumbai who introduced us to the Visual Data India project. All manner of interesting visualisations live here, including some great narratives on the philosophy behind visualisation. The Farmer Suicides visualisation caught our eye, and the accompanying walk through demonstrates how different the same data can appear when it is combined and visualised through different lenses.

Laina Emmanuel and team joined us for the Delhi Meetup. Accountability India perform key research on public service delivery in India through their PAISA programme, making “practical, scalable, people-friendly tools and us[ing] these tools to collect data”. They also allow people to download their datasets, and contextualise the information contributing visualisations. Their website is also a great resource for those working in the accountability sphere, including latest articles on topics such as Right to Information (see below) and other Policy Briefs.

We met the team from CBGA for what we thought would be a short interview with their executive director, Subrat Das, as research for the Civil Society & Technology Project that Lucy is working on. We ended up having a fantastic impromtu workshop/discussion with the whole CBGA team on what Open Data is, and what it means for India and their work.

CBGA’s work promotes transparent, participatory and accountable governance, and a people-centred perspective to the policies shaping up the government budgets. CBGA’s research on public policies and budgets, over the last eight years, has focused on the priorities underlying budgets, quality of government interventions in the social sector, responsiveness of budgets to disadvantaged sections of population (e.g. religious minorities, scheduled castes, gender budgeting) and structural issues in India’s fiscal federalism. 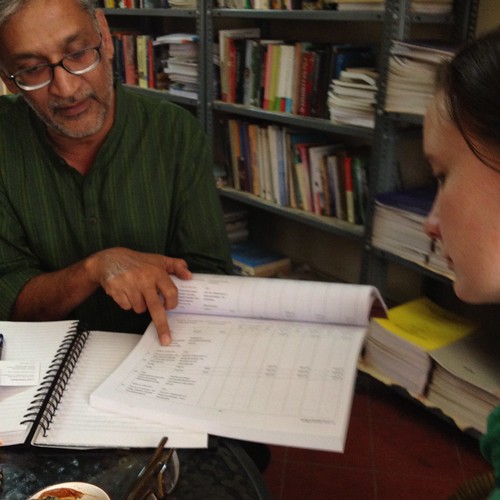 We met up with CBPS for an interview about how they get, work with and present government financial information. CBPS conduct research and evaluation in the areas of policy, budget, governance and public service delivery as well giving training in this area.

Centre for Internet and Society (Bangalore)

Definitely one of the hubs at the intersection of technology and policy. We were invited for an afternoon to talk to the team and to give a short talk on Data Journalism and what that means for Open Government in India. The Centre for Internet and Society performs multidisciplinary research to explore, understand, and affect the shape and form of the internet – looking at issues such as accessibility, access to knowledge, openness and internet governance.

We swung by CPP to talk to Sridhar Pabbisetty about the Open Governance India portal, which collates data about India from a variety of sources such as the World Bank and presents it through graphs and charts. CPP performs research, teaching, training and capacity building and works on improving development outcomes across the region. While we were there, we also got the opportunity to sit in on some of the lectures, including a Political Marketing class for the female leaders of tomorrow and a fascinating talk on gay rights in India, encouraging members to rethink cultural stereotypes.

NIPFP were kind enough to give us a home for the Delhi meetup. They are a centre for advanced applied research in public finance and public policy. Established in 1976 as an autonomous society, the main aim of the institute is to contribute to policy making in spheres relating to public economics.

Unfortunately, we didn’t get the chance to meet these folks in person, but they look like they are doing some great work. PRS claims to be the only organisation in the country that tracks the functioning of Parliament. PRS provides a comprehensive and credible resource base to access Parliament-specific data, background information and analysis of key issues.

A network of geeks which was behind the Fifth Elephant Conference we attended. They host events from large conferences to small geekups and hackdays, and aim to provide a discussion space for geeks.

This is a very active online group of data enthusiasts. The topic is ‘data’ in general, rather than specifically open data, but open data and transparency crop up frequently as issues. The group also meet in person – in fact, we co-organised the OpenData Bangalore Meetup with them.

The OKFN India group. Just getting started, this group is not as large as the Datameet Group yet, but focuses specifically on Open Data.

Many people across the world will have heard of Internet Archive and Wikimedia, but its well worth pinging their local networks if you are travelling somewhere new. We met Wikimedians in almost every city we visited, and had some excellent conversations with the Internet Archive guys who we met in Bangalore. Definitely networks to bear in mind!

An Overview of recent government updates

As the Right to Information is such a hot topic, we thought it might be useful to pull together some of the links we found regarding RTI. It is worth noting that we first heard about the site which offers online filing of Right to Information right at the end of our journey – suggesting that it may not be that well-known.

Have we missed someone? Who should we look out for on our next trip? Please do let us know via the India Mailing List.